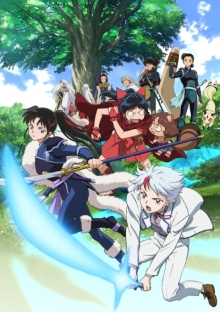 29 October 2020
In this very strange year, unfortunately driven by the events created by the world pandemic, it is particular to find myself writing an article in this period where I used to be leaving for Lucca Comics, the main Italian festival dedicated to anime, manga, games and comics. The health emergency forced me to make different choices but the positive side despite the difficulties, are the new and interesting products who have arrived in the meantime and that I want to talk about. The first big and unexpected surprise came with the publication of a new anime series, sequel to one of the most famous works of Rumiko Takashi: Yashahime, the half-demon Princess.
The story revolves around Towa and Setsuna, the Sesshoumaru's daughters who were separated as children due to an accident. Towa, catapulted into modern Tokyo, is adopted by Sota Higurashi, Kagome's brother, while Setsuna, who remained in the Sengoku era, loses her childhood memory. Several years later, Setsuna, who has become a demon hunter alongside Hisui and Kohaku, faces a centipede demon who is on the hunt for the rainbow pearl she owns. In the battle joins Moroha, a half-demon and daughter of Kagome and Inuyasha who kills demons as a bounty hunter, and the two girls are thrown into modern Tokyo due to a portal that suddenly opens. Here they find Towa who, recognizing Setsuna, feels guilty about the loss of her sister's memory. The three girls thus decide to leave together to try to recover Setsuna's memories.
This new series by Sunrise was announced last May and started its simulcast broadcast from October 3, also with english subtitles, on the Crunchyroll platform.
The staff that is dealing with the animation is largely the same that has followed all the seasons of Inuyasha, starting with the director Teruo Sato, the chara designer Yoshihito Hishinuma and the scripts by Katsuyuki Sumisawa, without forgetting the inevitable music of Kaworu Wada. Rumiko Takahashi herself participated by providing the drafts for the chara design of the new characters.
The sense of nostalgia you feel watching the first episode, with the return of all the characters from the series that we have followed for over a decade, is really enjoyable: it's like finding a bunch of friends you haven't seen in a long time. The attention of the staff in the drawings and above all the accurate recovery of many of the old details immediately creates an important link with the main series, very appreciated by the fans, but rather anonymous and perhaps unclear for those who are approaching the world of Inuyasha for the first time.
The story is very intriguing, the new protagonists of the story have well-defined characteristics, which are perfectly adapted to their respective parents (carefully observe Moroha's attitudes to believe!) and create an immediate and very fluid consequentiality. Both the visual sector of the Sunrise and the musical sector with Wada are a guarantee of quality between detailed settings and very vivid colors and sounds that bring back the typical atmospheres of the Sengoku era.
This perfect harmony with the previous series of Inuyasha is, however, at the same time one of the strengths and weaknesses of Yashahime, practically suitable only for those who have already followed the adventures of Kagome and companions: there are many references to past events and very often it comes assumed that the viewer already knows a lot of background. This might be acceptable to those who have already followed Inuyasha in the past, but it creates a lot of confusion in new viewers as this sequel stands more as a "new season" of the main series. Many of the jumps that occur during the narrative, at least in these early episodes, between modern Tokyo, Sengoku era and childhood flashback, necessary to introduce the characters, turned out to be a bit confusing and almost completely impossible to understand without knowledge of past events.
By the way this series remains a must to see but the suggestion I would like to give follows the logic of what was said previously: if you are an old fan of Inuyasha you absolutely must not lose it, otherwise if you do not know what I’m talking about, I suggest you approach Yashahime only after recovering the vision of the main series.
All News