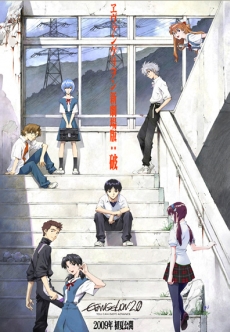 20 December 2010
Once upon a time there was Evangelion, or maybe it's better to say "there is yet". One of the most legendary anime series of all time on which everything has been said and thought is back to the scenes even more chaotic than before. But let's look back in order at some of the previous installments. The year was 1995 when in Japan was broadcast a television series focused on robots and fanservice that would completely upset the world of animation and created a huge amount of hardcore fans which grows constantly. Neon Genesis Evangelion made his entrance on stage, but on tiptoe. For this reason it had not received the share hoped so the budget was reduced by forcing the author, the eccentric Hideaki Anno, to amend the last two episodes, concluding a slow decline began around the seventeenth episode chart. Do you love me? and Take care of yourself reached a sort of experimental animation that completely erases the history who had been until then to finish the series with 40 minutes of introspective vision in the mind of the protagonist.
Fans across the world have unleashed a revolt for a worthy series finale contributing to an exponential increase in sales and merchandising related to the series. So two years later, in 1997, the two films that were made were to bring an end to the protests raised in the previous time . Was shown in Japanese theaters Death & Rebirth, a kind of summary of what happened in the TV series with some added scenes and The End of Evangelion, a new extended version of the last two episodes, respectively, Air - love is destructive, and My purest heart for you, as they were originally designed before the budget cut forced to delete them. Also this time a final that can be 'viewed' convince the most avid fans to put their heart at rest.
In Italy the phenomenon did not come until several years later with the first broadcast TV series on MTV in December 2000 and the publication of the movies in 2005.
Finally we come to 2006 when Hideaki Anno himself announces after 10 years from the last movie the creation of a new animation studio, Studio Khara, and putting into production a new series of 4 films renamed The Rebuild of Evangelion in which he want to renew and improve the history of Evangelion thanks to new 3D technologies 3D which allows it to 'land' in the new millennium.
The first chapter, entitled Evangelion 1.01 You Are (Not) Alone was screened in cinemas next year while the secondEvangelion 2.02 You Can (Not) Advance arrived in 2009. The last two chapters of which we know only the name of the third, Evangelion 3.03 You Can (Not) Understand, will come out in 2012.
Although these two films can make a good impression on those who have never followed before the adventures of Shinji Ikari and his companions, who knows well the series and looked it from the beginning clearly perceives conflicting feelings. The vision of 1.01 has no elements which are particularly relevant: is a summary of the first 6 episodes of the television series in which we follow the growing relationship between Shinji and Rei Ayanami. You can enjoy an almost perfect reconstruction of tv series where the scenes and the choices of direction have remained unchanged but the attention to detail by the new CG technologies can view it all in a new light much more 'fresh' than the old VHS.
After 2.02 you start to see and touch the real 'reconstruction' of Evangelion. Certainly there is a tendency to have made it a commercial product more than the first serie. The flattening in the characterization and some changes (Rei strangely is more enterprising and Asuka thankful to her friends) to their personalities, from a very fragile inner obsessive introspection, leaves the audience a little disappointed.
But is the presence of new items to hit even more in this film that marks a complete departure from his past: new Evangelion, new location (such as the lunar base of Tabgha), the Angels completely redesigned, the Eva Beast Mode and the new character of Mari Makinami (of marginal impact but she helps to renew the relationship between the main characters). We soon ends up being captured by the genius of Anno that can reinvent itself in an extraordinary way. The genre of narrative history appears to be the same, like viewed as a prism through which everything changes but in reality following the same road. The soundtrack has been completely re-arranged by Shiro Sagisu in a new version of songs with the adding of some BGM from Karekano that fits perfectly.
And once again the viewer has no choice but to follow this new script for seeing where Hideaki Anno will decide to get us.
If I were to rate Evangelion Rebuild a ten would be almost taken for granted and perhaps not entirely truthful. Once again, in fact, Evangelion will not fail to break the spectators into two parts divided equally among excited for this new role as a time series and those who are worn out by this new author's madness. Whatever happens Hideaki Anno has again hit the mark.
I can only invite you to see them almost once and I wish you a Merry Christmas and a Happy New Year!
All News