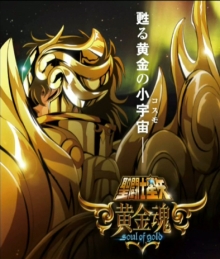 15 February 2016
There are television series with a timeless popularity, especially for the generations born at in the eighties or nineties, who never cease to create expectations. Saint Seiya, also called Knights of the Zodiac, is a good example that certainly the audience of fans knows well.
About a year ago we were speaking about the animated film created to celebrate 40 years of Masami Kurumada activities, the author of the original manga. However Saint Seiya: Legend of Sanctuary was not the only project related to this anniversary. In April 2015 began the serialization of a new mini series called Soul of Gold.
Bandai has decided for the first time to publish this ONA series simultaneously worldwide in 22 countries (including Italy) in subtitled version using web community Daisuki and Crunchyroll. ONA is an acronim for Original Anime Network, this means that the series have an initial release on internet and only later in the normal television channels and DVD / BluRay.
The story is a spinoff which take place at the same time of the main story of the chapter Hades - Elysium. The 12 Golden Knights have just sacrificed their lives to bring down the Wailing Wall and allow the Knights of Bronze access all'Elisio to prevent Hades to bring to fruition the extinction of mankind. But inexplicably the Golden Knights are raised and wake up close to Asgard where now is in charge the new celebrant of Odin, Andreas, in replaced Ilda strucked with a mysterious illness. The Golden Knights led by Aiolia will face the danger inside the forbidden tree of Yggrasill summoned by Andreas, also trying to understand why and by whom they have been resurrected.
This new series has a clear celebratory intent and from the point of view of history is very enjoyable. I have truly appreciated the classic scheme "in stages" that recurs throughout the entire time series (in this case, the opponents are placed in the Six Yggdrasill Rooms) and the congruence, even though it is a spinoff, which is maintained on parallelism of the events between what happens in Asgard and Elysium where the Knights of Bronze are fighting with Hades.
Another plus point is the choice of the chara design in the style of Shingo Araki . Unfortunately after chapter Elysium, with the untimely death of the great chara designer, the series of Saint Seiya can no longer have his old animator. But the attempt to re-use his style was a great choice. Obviously we are not at the original level of Araki and I’m a bit surprised. We know that the Japanese are masters in the art of "copying" (in its positive connotation!). But this time, maybe for choice, they haven’t work very well. The silhouette the characters seemed too thin, more shoen than shojo, and have lost the epic charm that they always had in the previous chapters.
Same goes for the soundtrack. Hiromi Mizutani was very good at composing songs that perfectly combine with the story told, but even here the epic and classical songs of the original OST by Seiji Yokoyama are unmatched in their combination of classic and electric instruments. Again it’s strange that they choose to use new music making a separation with previous series, where they always reused historical songs of the saga.
Saint Seiya fans cannot miss this new chapter that could mark a first step in potential new future saga. Because Bandai doesn’t seem to stop here.
In 2016 there’s the 30th anniversary of the first broadcast of the television series and initiatives are also expected for this event including the airing of a new series as announced in a panel which took place in December 2015.
So stay tuned in official Bandai channels!
All News