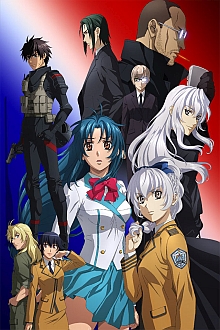 01 August 2018
Nobody expected it but after promises, years of silence and so much work behind the scenes, Shoji Gatou succeeded: 13 years later finally arrives the final season of Full Metal Panic.
We must go back to 2005 when the Kyoto Animation, after the great success of Full Metal Panic Fumoffu, produced Full Metal Panic The Second Raid, the transposition of the two Owaru Day By Day novels, one of the most dramatic and obscure parts of the main plot. After that success, no one expected such a long break until last year when Gatou, in collaboration with Studio Xebec, finally announces the coming of the final season.
Full Metal Panic was born from the pen of the same Gatou and more precisely from a very long series of light novels that have been quite successful in Japan. The total novels are 23 divided into 12 volumes of the main story plus 11 collections of short stories in comic way.
Kaname Chidori is a normal high school student who attends the Jindai high school in Tokyo. Unaware of her talents, the girl is actually a "whispered", an individual who possesses innate knowledge called "black technology", which is a very advanced technology for avant-garde military applications. For this reason, Kaname becomes the target of global terrorist organizations who want to take possession of his knowledge. To cope with this threat, a young boy belonging to Mithril, , a mercenary body devoted to maintaining world peace that does not belong to any world nation but operates independently, is sent to his defense in disguise. So Sosuke Sagara, a military professional for his guerrilla past, is chosen to defend the girl. Between AS fighting, everyday school life and military intrigues, the two boys will begin their relationship between the gritty character of Kaname and the total inability of Sosuke to adapt to daylife.
The animated transposition began in 2002 with the first season to cover the narrative arc of the first 3 novels, followed Fumoffu in 2003 that instead took inspiration from short stories and finally in 2005 The Second Raid based on novels 4 and 5.
We arrive at 2018 where, with the subtitle of Invisible Victory, the story continues in the novels from 7 to 9 for a total of 12 episodes, 4 for each novel.
The work done by Studio Xebec is excellent and the series, also thanks to the narrative strand of great action in which the story is placed, immediately comes alive from the first episodes with a continuous uprising of dramatic situations.
The screenplays and dialogues were made by Gatou himself and the decision to not use the CG for the mecha animations (but have everything handmade) turns out to be successful both for the overall quality and for the continuity with the previous series. However, in the 12 episodes it can be noted that the budget was not the highest and the director had to reduce the cost of production: the pursuit by car in the second episode is terrible compared to the sequences of combat between AS that are much more accurate. During the whole season these qualitative drops are quite recurring without compromising the final result.
The choice to not include the Odoru Very Merry Christmas novel in the animated series is disappointing, however is possible find it in Audio Drama version.
The Japanese version presents the same original voice actors, a choice of continuity that in localizations it has not always been possible.
At present time there are no news on the second part of Invisibile Victory, a further 12 episodes that will cover the last 3 novels of the main story. We hope that national and international sales will allow a gain of budget to finish a series that deserves a happy ending.
All News