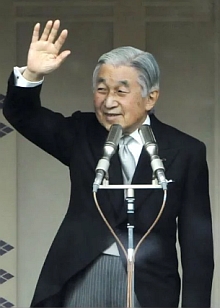 30 April 2019
Among the most fascinating aspects of Japan and its ancient culture there are a multitude of historical figures that have remained current despite the centuries of history passed. Although Japan is certainly one of the most technologically advanced countries in the world, the intertwining of its modernity with the more traditional aspects of culture has always had an imperturbable balance.
And the figure of the Emperor, foreseen in the Constitution of Japan, remains one of the most loved and represents for the people the symbol of the nation and its unity.
The history of the first emperor of Japan dates back to 600 BC and has its roots in legend. Jinmu, the forefather of the imperial dynasty, was considered to be the great-grandson of the Great Goddess of the Sun Amaterasu, one of the main Shinto deities. According to this tradition the Japanese sovereigns have always been considered descendants of the Gods so much that the term that identifies them is tenno (a term introduced starting from the reign of Temmu in 672 AC) which means "celestial sovereign". In reality the first monarch that has been ascertained as historically existing is the emperor Ojin (the fifteenth starting from Jinmu) and the direct descent seems to be confirmed only by the emperor Keitai, who ascended the throne in 507 AC.
Nowadays the role of the emperor has been greatly reduced, regulated in the Constitution it is limited to performing ceremonial tasks and cannot have powers relating to the government. However, it is seen by the Japanese people as a reference figure to guarantee democracy.
However, there is an important association that concerns the method according to which the Japanese count the years dividing them into historical periods. In fact, in Japan, as in the rest of the world, the conventional method is used (eg we are now in 2019) together with the year based on the duration of the reign of the current emperor which is called "era". Thus from the midnight of the first of May the Heisei era will end and the Reiwa era (meaning "wonderful harmony") will begin under the reign of the new emperor Naruhito who will succeed the outgoing Akihito who has decided to abdicate in favor of his son.
The choice was particular since the last abdication in Japan dates back to 1817 and this choice, common in classical and feudal Japan, had become so obsolete that it was not regulated by a law. After the request of Akihito to be able to leave the throne, with much difficulty the government of Tokyo has established a specific path for the abdication that will follow a very precise ceremony.
The change of regency will also mark the change of Tenno Tanjobi's national holiday, the emperor's birthday, which will be moved from the current 23 December to 23 February, consequently also modifying access to the most internal areas of the imperial palace that can be visited only for two days a year: January 2nd and during, in fact, the Tenno Tanjobi.
The life of the Japanese royals, however, is not all pink and flowers but is always marked by rigid rules that also limits individual freedom. The Emperor and all members of the Imperial Family do not have their own family status, have no documents and do not have the right to vote. They do not have registered current accounts, they do not have credit cards and they have no possessions and in case of travel outside Japan they exhibit a parchment that verifies their identity. Every public and private aspect of family members is overseen by the Kunaicho or Imperial House Agency, created after the end of the Second World War in order to guarantee that the emperor could no longer intervene in any way in the political, social and economic life of the country.
This independent agency that has about 1200 employees administers an annual budget of around 200 million euros for the maintenance of the properties and the expenses of the individual members. The imperial family cannot freely leave the building but every public and private exit must be approved by the Kunaicho. This kind of pressure exerted has created various discontent like the story of Princess Masako, Naruhito's wife, exhausted in trying to adapt to the imperial label and giving birth to a male heir. Also famous is the choice of Sayoko, younger sister of Naruhito, who has chosen to renounce her vows to marry a non-noble.
However, it remains very fascinating to see how the Japanese culture, in its beauty and contradictions, continues to merge its precious historical heritage with current modernity without compromising.
All News