Makoto Shinkai's second film, a story with poetic tones that addresses the theme of distance, spatial and temporal, through the intertwining of stories between the two protagonists. 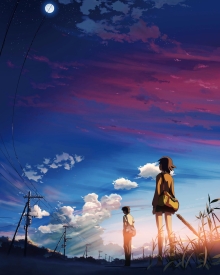 All the great authors of literature and entertainment, before reaching success, had to make the "apprenticeship" and go through tests, failures and errors that finally led them to be recognized worldwide. This is the case of Makoto Shinkai, the famous Japanese screenwriter and director of animation, who came to the fore thanks to Your Name, a 2016 masterpiece film that received many awards from all the world critics. But Shinkai, like everyone else, has had several debut works, among which, noteworthy, is 5 Centimeters per Second.
The film arrived here in Italy during the 2008 Future Film Festival where it won the prize for the best feature film and was brought in the home video version thanks to Kaze (French publishing house that also included the Italian dubbing). Last year, thanks to the Nexo Digital - DynIt partnership, the film was republished in double BluRay and DVD versions and brought to Italian cinemas thanks to the success of the most recent Your Name.
The narration begins in Japan in the early 90s and tells the story of two young teenagers, Takaki Tono and Akari Shinohara, who thanks to their common passions become great friends during elementary school so they also being teased by classmates. At the end of elementary school, however, the two boys are forced to separate: Akari moves to the prefecture of Tochigi and Takaki goes to a Tokyo school. The two continue to keep in touch by writing letters, but when Takaki learns he has to move again, this time to the distant Kagoshima, he realizes that he has one last chance to see Akari before leaving and makes an appointment with her to reach her by train and meet her in person.
The 60-minute feature film is divided into three chapters (Cherry Blossom, Cosmonaut and 5 Centimeters per Second) similar an OAV series that takes place in three different moments in the lives of the protagonists. The title refers to the speed with which the cherry petals, a recurring element of the story, fall to the ground. The plot and the direction choices of Makoto Shinkai are very deep and touching but at the same time they also show how the author's inspiration had to be still refined before reaching products of the level of Your Name.
The style of the narration is very poetic, the feeling is like reading a fairy tale, obtained through various directing techniques such as the fixed frame off the field, where the voices of the protagonists are heard while the image is fixed on a contour element. This however has the defect of making the dynamics of the story extremely slow, sometimes almost heavy. It is useful when the feelings of joy, anxiety, or concern of the protagonists are highlighted, but avoidable in more narrative passages where greater action would have given more breath to the scene.
The backgrounds and animations are well-kept, in certain situations they seem almost real shots even if the chara-design could perhaps be more detailed since it is very lightened compared to the rest of the scene, creating a sometimes-striking contrast. The music created by the composer Tenmon, of which Shinkai has repeatedly made use of the collaboration, is also splendid, mainly based on piano themes that link perfectly with the poetry of the narrative.
Lastly, without spoil anything, the plot and the script, however moving and permeated by that sentimentality with feelings of anxiety or sadness due to the distance and the passage of time that can erase beautiful relationships between people, is not very linear and it has a rather fast ending that stands out a lot from the previous narrative. The division into three sections of life is original, but a little confusing, resulting especially in the second episode very disconnected from the remaining context.
5 Centimeters per Second is a beautiful film that, like all the works of Makoto Shinkai, tends to elaborate very deep and important human themes. Anyone who appreciates his works or looks for films with themes related to life and feelings will appreciate the vision of this work by the director, despite some minor youth’s mistakes.
All News