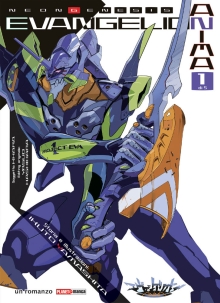 30 November 2020
For all the old fans of Evangelion, like myself, the last decade has been an twist of situations between the conclusion of the twenty-year manga of Sadamoto, the continuous delays of the Rebuilds (where it seems finally confirmed the date of January 23, 2021 for the fourth and last film), the Netflix revival and the usual huge amount of merchandising products more or less connected to the saga. And now, among the various productions, comes out a Japanese re-edition of the light novel published Dengeki Hobby Magazine collected in 5 volumes: Evangelion Anima, an alternative ending to the traditional series. During last year this edition had also been proposed on the international market with a new serialization that is currently in progress.
Three years have passed since Shinji Hikari prevented the realization of the Huamn Instrumentality Project. When the chasm in the center of the Geo Front opened, the Eva series was not encircling unit 01, but unit 02 was there. A moment before the completion of the ritual that would initiate the unification of all souls, the Eva-01 was managed to repel the assault forces by interrupting the ceremony and the Tree of Life, which appeared in the sky which had unit 02 at its center pierced by copies of Longinus' spear, was shattered. Now Shinji and Asuka, led by Misato who is in charge of NERV, continue their job as Eva pilots even if there is no trace of the Angels for some time while Rei has three clones called Quatre, Cinque and Six who reside in Earth orbit aboard experimental Eva units powered by S2 motors. But one day the Eva 0.0 controlled by Quatre suddenly goes into Berserk, starting a situation of extreme gravity.
It is important to specify, as written in the afterword of the first book by Ikuto Yamashita himself, that Anima was developed at the request of Hideaki Anno during the processing of the material that would make up the history of the Rebuild of Evangelion films. Anno asked Yamashita to try to develop a parallel story together with editor Hasuo Hashihara (and who contributed to several narrative choices such as the idea of Rei's clones). I believe that this contemporaneity of the two works is what allowed Anima to have one of the most important elements even before originality: narrative coherence.
Too often the never-ending series of spinoffs and stories related to the Evangelion universe, while having great quality, have always lacked an element to keep them in line with the original story. Thinking of Girlfriend of Steel rather than the Shinji Raising Project, although they should be considered as a spinoff, the different characterization of the characters and the totatl changed style with which the more technological parts were treated, for example, has always made them deviate from the goal.
Reading Anima, on the other hand, we immerse ourselves again in Evangelion following that trend and that narrative style that has distinguished the TV series and films, giving a sense of natural continuity that is absolutely not taken for granted in this type of operation. The same language that is used in the book is a clear example, full of technical terminology and in the description of the fights that are reminiscent of the situations in the anime.
Yamashita, being also the designer of the mecha part, has added many technical illustrations that embellish the volume and help it even more in consistency with what has been seen previously. The story also follows extremely creative tracks resulting in interesting and intriguing both from a narrative point of view and from that of character development.
My only perplexity remains, as in every new proposal linked to Evangelion, always the same. I find that Evangelion has already said everything there was to say, although its appeal has remained unchanged for almost twenty years and whatever bears its name is always a wave of hype that fans can't stop despite the level. overall quality almost never up to par.
Those who do not know Evangelion will first have to recover what has been lost while historical fans can throw themselves into the reading of this beautiful story with the usual question that accompanies us with every new work on Evangelion: did we really need it?
All News