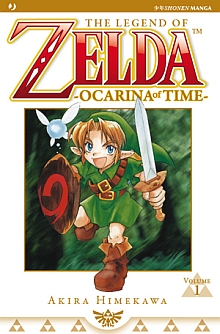 The Legend of Zelda on manga

01 July 2010
Who has never heard of Princess Zelda and Link, the epic hero that in more than one occasion did not fail to travel between monsters and dangers to save her? It was 1986 when the first episode of the saga was released for the NES, the first console in Nintendo’s history. Since then the adventures have followed through all the new consoles of the Japanese factory with the continuous improvement of new graphics capabilities and innovative game systems born from the brilliant mind of Shigeru Miyamoto: from the Z-targeting in Ocarina of Time until the modern tracking systems of Wii in the last chapter of the saga, Twilight Princess. I admit to being a big fan of Zelda and have played all the titles released. Even if I devoted the first NES and SNES titles I can not have found Ocarina of Time a masterpiece in gaming history and I don’t deny that my article is prompted largely by the exaltation on which the last month I started playing Twilight Princess. And also one month ago finally an Italian Editor have published three volumes, respectively The Legend of Zelda - A Link to the Past and The Legend of Zelda - Ocarina of Time, 1 and 2.
I must say that they did a great bet but at the same time an excellent investment in publishing these little gems, maybe for a small group of readers, but really exciting. The author of these volumes is the skilful Akira Himekawa who had a clean draw perhaps closer to a comic rather than a manga. He perfectly reinterpret some of the peculiarities of the story and characters rendered in the game. The bad point is only can be found in the environment.
Who has not played the two games and is not a big fan of the saga will hardly be able to understand the thousands of citations that are made throughout history. Also many parts are not perfectly explained, as if it were a sort of integration to the original games. Across those who know the world of Zelda and had fun wandering around the various versions of Hyrule’s realm presented in the games will find themselves perfectly immersed in the story, recalling passages experienced personally as a player and appreciating some changes and some new character that helps to hide a sense of deja vu is felt through the pages.
Those manga are a must for the Zelda’s fans. For anyone who does not know Link & Co. remain only the advice to try any of over fifteen titles released for the various consoles, you will not regret!
All News