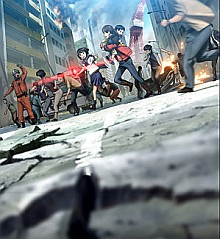 Japan: between tsunamis and quakes

16 March 2011
The tragic events of recent days have shown to the world nightmare’s images only seen in movies that lead me to deal with an issue that has little to do with Manga and TV animation but allows to highlight some aspects of Japanese society also reflected in some arts which comes to us. The people of Japan for centuries lived with the threat of earthquakes that they have learned to fear and not underestimate, as unfortunately happens in many other parts of the world. Disasters like the one of recent days are not shown only in Hollywood movies but we can see them in a small part of the Japan productionsthat demonstrate how their population is aware by the delicate balance between nature and man. It’s obvious to mentionTokyo Magnitude 8.0, the story of a boy who survived at a massive earthquake that destroyed the capital of Japan. But other series such Shangri-la or Mujiin Wakusei Survive have the goal to focus attention on a nature that rebels against the technology . And we could go further.
When first I saw on television the tsunami floods and explosions in nuclear power plants I have remembered the scenes of the first Neon Genesis Evangelion episode: Angel attack.
Once again I understood how the awareness of the consequences in such disasters are well rooted in the mind of Japanese people. And that, unlike many who talk and talk but in the end not accomplished anything, has a great reflection on their reaction to the tragedy with a composure almost overwhelming for our civilization than often make a shield of high moral principles then let go to the looting at the earliest opportunity.
The rules relating to construction of buildings in Japan have a rigorous proof . The buildings are constructed with a flexible cement, carbon fiber wrapped around the pillars to prevent fractures and anti-seismic bearings and various types of sinks are included in the plans and foundations. After construction they proceeds with some stress tests simulating an earthquake with giant cranes that shake the structure: the law requires that each side has a drop of at least 10 meters, measures almost unthinkable for the construction industry in countries like ours.
At the end of these tests are also carried out a series of studies related to the evacuation of the buildings by releasing, starting from the ceiling, thousands of colored balls that trace the routes of exit from the structure. The interiors are decorated and shaped accordingly to maintain the lowest possible obstacle in case of escape from them. But you can not have a ready response in the event of a disaster without proper preparation. For this reason in schools, offices and even in residential neighborhoods are continually being proposed several drills in which every detail is prepared to behave in case of alarm . The month of September is the so-called "safety month" in which every year there are several activities for being prepared to protect the community.
As we all know well after the tragic tsunami that hit Indonesia in 2004 is also vital early warning . It’s impossible to predict an earthquake but a tsunami usually show up to several minutes if not hours after the seismic event. On 11 March, despite the high number of casualties, the signal of an approaching tsunami occurred 14 minutes after the earthquake, 15 minutes before the arrival of the first wave. This fact has helped thousands of people to flee. It has been allowed by the advanced Tsunami Detection System which even Europe and the United States are taking as standard reference.
Alongside is important to remember that in these cases there is an imponderable element that can destroy security system: the fear.
Events of this resonance can cause emotions which can bring chaos and despair, sometimes important resources to get out of desperate situations, but also huge obstacles in trying to save a community. In front of the world is the composure and coolness of Japanese the real weapon that has enabled them to contain damage. In many websites have been reported stories of great humanity often questioned or criticized toward people of Japan. From supermarkets taken siege in which people try to take only what is necessary so that those coming after them can still find something up to the owners who do not hamper their customers and do not ask to be paid on time because they know that when all return to normal will be the same customers coming back to settle the debt.
The head of a factory blown away by the tsunami that is moved and runs to embrace one of the few employees remaining, completely tearing the veil that wants Japanese in workplace like machines incapable of feeling. And yet his composure in the ranks to take public transport or call their loved ones and the complete lack of complaints of the survivors.
In these days of tragedy the people of Japan gave us a great lesson of civilization that we had better not forget , always hoping not to be in the same situation. We are all with you, waiting anxiously to see the sun in Japan rising higher and beautiful than before.
All News